To [Madame Irma Antonetti of the Italian Cultural Association (Associazione Culturale Italiana) in Turin]. Barthes lets her know that his Italian journey approaches. He confirms that he himself will take the ticket Paris-Turin. He will arrive in Turin Thursday 29 March at 21H47 by train and he will go to Hotel Turin where he will doubtlessly have a note from her. As agreed upon Barthes will leave the other tickets to be taken by Madame Antonetti: by train, surely, from Trieste to Milan as he would like to stop in Venice; doubtlessly by plane from Milan to Rome and from Rome to Bari. Barthes would like to return to Paris by plane on Friday 6 April during the day. Barthes ends his letter by thanking Madame Antonetti for all this and by sending his respectful greetings to her.

On headed paper; with punched holes (not touching text). 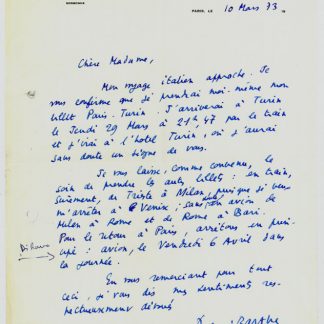