First edition of this monumental survey of Chinese life in the 18th century as witnessed by the Jesuit missionaries. This work by missionaries including Cibot, Bourgeois, Poirot, Ko and Yang comprises translations of classic Chinese works of law, maxims and proverbs, as well as essays on Chinese linguistics, current affairs and scientific observation. Volume VII is a reprint of Amiot's "Art militaire des Chinois" (Paris 1772), the first translation into a European language of the ancient Chinese military strategy, while volume XII, the "Vie de Confucius", was more complete and accurate than any previous text on the subject.

Amiot, the main contributor, went to China in 1740 and soon won the confidence of the Qianlong Emperor, remaining for the rest of his life in Beijing after the suppression of the Jesuits in 1773. Fluent in both Chinese and Tartar, his works were amongst the first to bring the philosophy and life of the East to the western world, and his "Dictionnaire tatare-mantchou-français" (Paris 1789) was the first to introduce these languages to Europe. Many of the engravings are based on Chinese designs sent by Amiot to Henri Bertin, minister in charge of Chinese affairs under Louis XVI.

Volumes 16 and 17 were published much later in 1814 and under a different imprint, and complete sets are infrequently found on the market.

Some wear to spine ends and at edges. Provenance: from the library of Jean R. Perrette with his bookplate on the pastedown. 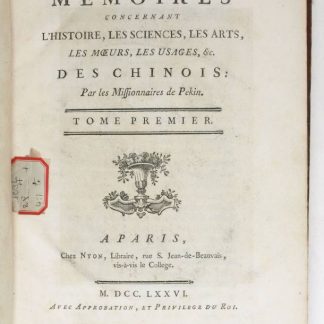