First edition of this rare treatise on human action and the voluntariness of man's ethical dispositions: "an investigation of whether the formation of a virtuous or vicious habit is due to our freedom of choice. The treatise is divided into fourteen chapters and begins with a doxographical survey in which the Aristotelian position is opposed to the doctrines of the Stoics and the Platonists. What these latter positions have in common, according to Porzio, is that they both deny the complex nature of the human being, which he forcefully depicts as inescapably composed of both rationality and materiality. His analysis of the limits of human freedom touches upon Renaissance concepts of man and his place in the universe, as well as combines a distinctive approach to Aristotle’s teaching with an heterodox attitude towards divine grace" (L. Casini, "En renässansaristoteliker om den mänskliga frihetens gränser", in: Lychnos [2009], pp. 49-67, at p. 61). Porzio (1497-1554), a student of Pietro Pompanazzi and variously a writer on medical subjects, taught philosophy in Pisa and Naples. He held that the soul is the individual and corruptible form of the human body.

A finely printed work, showing some slight brownstaining throughout. From the library of the historian of medicine Walter Pagel (1898-1983). 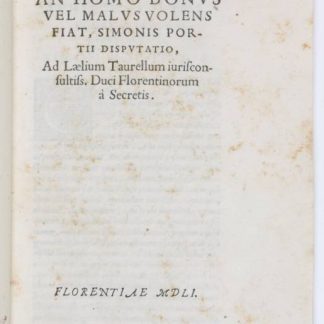