In French, an effusive and impatient letter to a fellow author and collaborator, offering advice on keeping the earnings of his poems, that he cannot access a notebook because he thinks he locked it up in an attic trunk together with the key, and that he is dissatisfied with the preface he wrote. In part, in translation: "Another question. What title? 'Posthumous Poetry' would only be good for a sub-title. I've been ransacking my brains and haven't come up with anything.

I've re-read my preface, with which I am not very satisfied. It seems cold, awkward, and poorly written. In short, it displeases me. I am going to rework it only insofar as correcting it goes. As for doing another one, I haven't got the time, and anyway, I can't see how I could do it better, even though I think it rather shabby." - Light chipping at edges and to centerfold, some small tape repairs to verso. 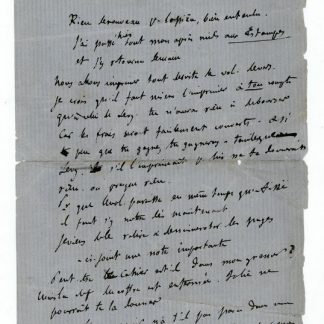