Manuscript letter in Italian, opening with a duplicate of an earlier letter, in a different hand, dated 26 September 1732, written in ink on one page of a bifolium originally folded 4 more times for sending (to 8.5 x 14 cm) with the address on one side and traces of a red wax on the other.

Letter in Italian concerning the cloth trade in the capital of Egypt during the last months of 1732. The letter is addressed to the Italian merchant Nicolò Caragiani in Venice, who actively traded with the Levant and correspondence with several other merchants survives. The present letter informs Caragiani on the demand in certain types of cloth, which prizes are expected to rise during the approach of Ramadan. It mentions various fabrics including silks, damask and wools and also includes the prices of coffee and pepper. The letter opens with a copy of an earlier letter, followed by the actual letter in a different hand, signed by one Michiel whose last name is unclear, but could read something like Petea or Retea.

With some faint foxing, and a tiny hole and a tear along a fold on the address side, otherwise in very good condition. 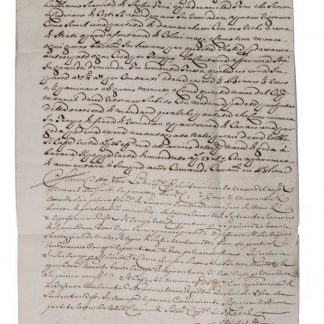