"The historic cornerstone of the study of mummification in English"

Pettigrew, Thomas Joseph. A history of Egyptian mummies, and an account of the worship and embalming of the sacred animals by the Egyptians; with remarks on the funeral ceremonies of different nations, and observations on the mummies of the Canary islands, of the ancient Peruvians, Burman priests, &c.

4to. With 13 numbered lithographed plates (the first used as frontispiece), including 3 fully and 1 partially coloured by a contemporary hand, of which 2 highlighted in gold. Contemporary half calf, restored and rebacked with parts of the original backstrip laid down, with new tooling and title-label on spine, cloth sides, later endpapers.

First edition of "the historic cornerstone of the study [of mummification] in English. For the time at which it appeared, the work was a monumental undertaking. Based on scholarly research and practical experience, Pettigrew's work was a summation of almost all that was known concerning Egyptian funerary practices. He compiled all the ancient sources and commented on them, as well as discussing many examples of mummified remains investigated by or known to him. The work is illustrated by [...] Georges Cruikshank (better known for his satirical drawings) that are the product of careful observation" (Peck).

With the bookplate of the British lawyer and politician Bernard John Seymour Coleridge, 2nd Baron Coleridge (1851-1927). Some foxing on the title-page and some spots and marginal waterstains on the plates, touching the last three illustrations, otherwise in good condition. Binding rebacked and restored. 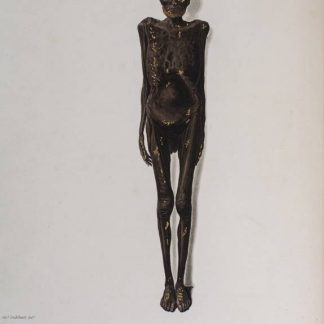 Sie sehen: Pettigrew, Thomas Joseph. A history of Egyptian mummies, and an account of the worship and embalming …London, 1834. € 3.000,00
In den Warenkorb