Large 4to. ¾ p. With autograph envelope.

Helen Elliott (1925-1990) is best known for her love affair with Lucien Carr and friendships with Jack Kerouac and Alan Ginsberg. She has been identified as the characters Ruth Erickson in Kerouac's "Desolation Angels" and Eileen Weber in the expanded edition of his "Book of Dreams".

German-born American photographer Hans Namuth (1915-1990) was known for his portraits of architects and artists, notably a series of photographs depicting Jackson Pollock at work in his Long Island studio, which are reputed to have precipitated a change in Pollock’s artistic style. Throughout the 1950s and 1960s, Namuth photographed de Kooning and his work, most notably, his "Reclining Man", and chronicled his studio’s construction in Long Island’s East Hampton artist colony.

Written in blue ink on a folded sheet of lined yellow legal notepaper. 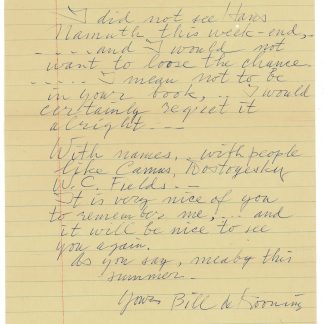