The Ottoman Wars in Hungary

In spite of the subtitle ("nuovamente mandate in luce"), this is the first edition of Ulloa's history of the Ottoman wars in Hungary, including an account of the 1566 Siege of Szigetvár. Though the battle resulted in an Ottoman victory, it halted the Ottoman advance on Vienna that year, and Vienna was not threatened again until 1683. "The Castilian-born Alfonso Ulloa was entrusted with various diplomatic missions by Emperor Maximilian as well as by King Philip II and thus had a first-hand knowledge of the events of the years 1566-1569. Disregarding the frequently panegyrical tone of the account, the book may still be used as a valuable historical source" (Göllner). Apponyi, on the other hand, cautions that "this is nothing but a reprint of Pietro Bizarri's 'Historia', published the previous year [... The book nothing to do with Ulloa's account of the events at Sziget published in his own 'Comentarios' in 1569: apparently, he found it easier to rip off Bizarri than himself ...] Ulloa has the nerve to present this shameless piece of plagiarism to his patron with the most unctuous and swaggering phrases [...] Cautiously, Ulloa shied away only from copying certain personal accounts of Bizarri's, or rather from presenting these experiences of Bizarri's as his own; everything else is reproduced verbatim".

Title page shows some brownstaining, otherwise a clean copy in a pretty contemporary binding. Formerly in the collection of the Marquess of Bute with the family's engraved armorial bookplate (from the library of Luton House, Bedfordshire; pre-1845) on the pastedown. 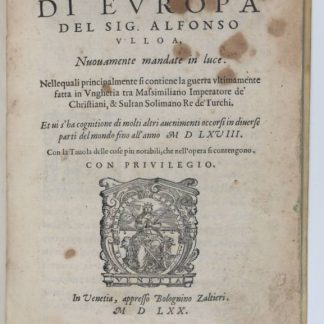