Second edition, revised by Shawki Sukkary. Abbas al-Aqqad (1889-1964) remains well known in Egypt as a versatile journalist, poet and literary critic. Translated from the Arabic original ("Athar al-`Arab fi al-hadarah al-Awrubbiyah") by Ismail Cashmiry and Muhammad al-Hadi and published under the auspices of the Supreme Council for Islamic Affairs. Chapters include Arabic beliefs, life, writing, trade, science, arts, music, philosophy, state's organisation, religious movements, nationalism, the press, etc. "To sum up the situation of the Arab world today", al-Aqqad writes: "It is a situation in which the future looks as good as the past, and pride in our fathers is not divorced from hope for our sons".

Binding slightly duststained and chipped in places, but still a good copy. 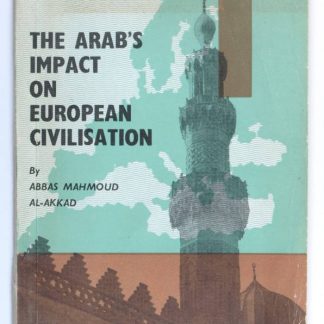