A remarkable series of photographs of the peoples and places of South Persia (modern Iran and Iraq). The first leaf - which contains the title with a small portrait of a street seller - is followed by four leaves showing views of the Abadan Refinery. The remaining leaves show scenes in Mohammerah (now Khorramshahr), Shatt-el-Arab, Dizful (Dezful), Ahwaz (Ahvaz), as well as artistic views of the coast ("Moonlight on the Shatt-el-Arab", "Sunset in the Gulf"). There are also further portraits of street sellers and other local people (dervish, snake charmer, barber). The booklet closes with a view of the "Pumping Station, Tembi" which served the Abadan refinery, "The road up to the oil fields", and a view of the Ctesiphon Arch. An uncommon and nicely produced view-book of the area. 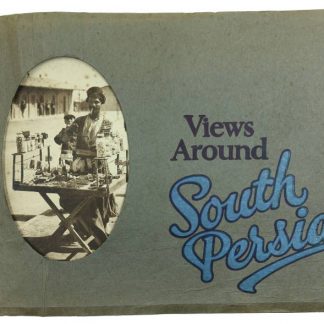