Travels through the Middle East, India and Europe, with 34 woodcut illustrations, including several trees

4to. (16), 540, (10), (2 blank) pp. With a woodcut and an engraved author's portrait, 34 woodcut illustrations in text, including several full-page, and some woodcut initals, head- and tailpieces. Contemporary calf, gold-tooled spine.

Rare first edition of a travelogue by the French explorer, merchant and diplomat François de la Boullaye-Le Gouz (ca. 1610-69). The largest part of the book deals with his travels through the Middle East and India, while a smaller parts treats Le Gouz's travels through Europe. In 1643 he travelled the Middle East under the name Ibrahim Beg, visiting Syria, Palestine, Persia, Egypt, Anatolia and Armenia. "Like so many European travellers in the east he adopted oriental clothes and an oriental name ... Unlike most European travellers to the east, however, La Boullaye-Le Gouz continued to wear his Persian clothes in his return to France and was consequently regarded as something of a curio" (Hamilton). A few years later he was sent by the French king with an embassy to the Mogul emperor Shah Jahan, where he met and became great friends with the Jesuit Alexandre de Rhodes (1591-1660).

La Boullaye-Le Gouz describes the routes he takes, the cities he visits and the people he meets along the way, with frequent observations on religion, natural history and commerce. The illustrations show various Indian deities, some city views or buildings, Indian and Eastern costumes, plants and trees. Pages 243-255 deal with plants, fruits and trees in India, including several palm trees, a fig tree, a jack tree and a melon tree. "The work is notable for its information on northern India and its relations to Persia, and for its inclusion of a summary of the Ramayana" (Howgego).

In Europe, Le Gouz travelled Italy, Greece, Poland, England, Ireland, Germany, and the Netherlands. In his later years he travelled again to Persia and died in Isfahan probably in 1669, whereafter the Shah ordered a splendid funeral to be held. Included at the end of the book is a list of names of the people La Boullaye-Le Gouz met, sorted by country; a list of uncommon words, and a table of contents. A second, enlarged edition was published in 1657 at Troyes. 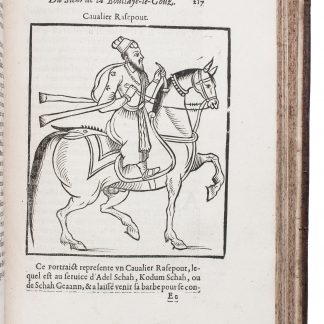