France or Germany, second half of 12th century.

A fine, two-sided, nearly full-page manuscript fragment discovered within (and subsequently removed from) the covers of a binding: most of Saint Jerome's letter 68, to Castrutius, beginning with "homines volutari in ceno [libidi]num". The text of the letter is continued and completed on the verso, there followed by Jerome's letter 146 to Evangelus, here breaking off with "et Galliae, et Britanniae, et [Afri]ca, et Persis, et Oriens et India".

In his letter to Castrutius, a blind man from Pannonia who had been thwarted in an attempted pilgrimage to Palestine, where he had wanted to visit the Church Father in Bethlehem, Jerome consoles the recipient by thanking him for his intentions and assuring him that blindness is not a condition brought about by sin. He comforts him by referring to Christ's words about the man born blind (John 9:3) and by telling him the story of Antony and Didymus. The letter was written in 397, during his work on his famous Bible translation from Hebrew into Latin. The letter to Evangelus, of unknown date, concerns the arrogance of Roman deacons.

Trimmed and discoloured from use in binding, with loss of part of inner column of text; verso dust-soiled and slightly stained; vertical slit in vellum along outer edge of outer column without loss. An exceptional, early survival. 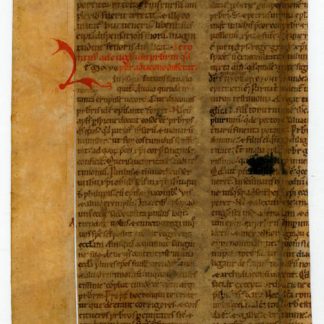