To Neel Goldblatt of Goldblatt Brothers Inc. in Chicago: "With pleasure, I received your letter and with pleasure I send you back the stamps with my signature on each although I never think of myself as a great person in this world. The only truth in my person is that I am fighting with all my patriots to live as free people in a free country in the free democratic world. We Egyptians, believe that this [!] a very justified demand. Unfortunately the Britishers do not agree with us and wish we live [!] as slaves under their domination. Our fight, now, is to force the British to understand our case and evacuate the Canal zone and thus gain our freindship [!] instead of our hateree [!]. To realize our aim, we are ready to sacrifice our lives. This is one side of a small picture of myself and you can find, Dear Sir, that there is no greatness in it but there is truth, faith and hope [...]".

Signed as General Secretary on a letterhead printed in Arabic. The addressee was a Polish-American-Jewish collector and member of the Goldblatt family that owned Goldblatt Bros. department stores in the Midwest headquartered in Cicago. A typed English heading states Cairo's "Liberation Rally Republic Square", Tahrir Square, also the center of the demonstrations of the 2011 Egyptian Revolution, a critical part of the Arab spring. In upper left corner traces of a staple. 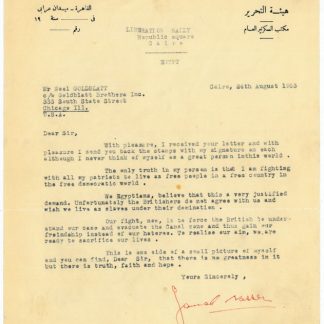