Scarce Russian edition of Marx's article "Wage Labor and Capital", first published in Geneva in 1883 in Leo Deitsch's translation and here presented in an 1894 translation by one "B. K.". Originally printed in the Neue Rheinische Zeitung in 1849, Marx's article was one of his first attempts to analyze the flaws inherent to the capitalist market and the dangers of labor commodification. It is now seen as an important preparatory work to "Das Kapital" (1867). Also contains Engels's 1891 preface. The publisher, Georgi A. Kuklin (1880-1907), is a curious figure worthy of further study: having fled to London at the age of 21, he later founded his own progressive reading library in Geneva and published the series "Library of the Russian proletarian" as well as publishing a valuable bibliography of Russian revolutionary texts before his early death.

Wrappers lightly soiled; stamp of a Russian bookstore in Paris and a non-existing library (with duplicate stamp). 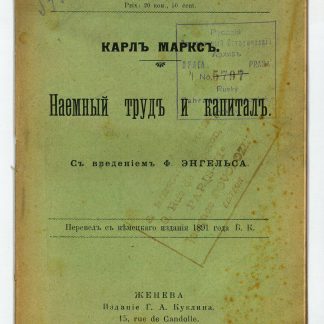