Scarce pamphlet representing an account of the first May-Day activities held in the newly "liberated" Russia, after the February Revolution of 1917. In a highly graphic and solemn text, the author, who was likely using a pseudonym, announces the grandeur with which Russian workers would celebrate the first international workers' day in the Soviet Union: "You will see the unfurled red banners, which will cover the entire Russian land, the land which was thus far reddened only with the people's blood, spilled by the former, now overthrown regime." The book further contains a fictionalized, imaginary account of what the first May 1st celebrations will look like, as well as a narrative of a suppressed factory demonstration held before the Revolution. The author also provides a historical sketch of the history of the International Workers' Day. Finally, the book concludes with the Russian text of an early revolutionary First-of-May song, "Vremia ne terpit." - Rust to staple; else very good. An important, striking document on the history of the official May Day celebrations which took place throughout the Soviet Union. KVK, OCLC show only the copies at Staatsbibliothek zu Berlin and the Swedish National Library. 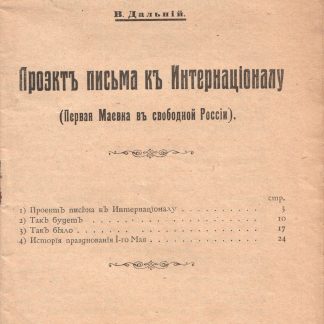