Across the Eastern Mediterranean

Mainly Eastern Mediterranean, but including South America, the Caribbean, London and other places, chiefly 1835/1836 to 1838, with a few later entries to 1844.

A remarkable naval logbook and diary kept by the young naval surgeon John Burns, documenting the voyages of four Royal Navy vessels, the H.M.S. "Harrier", the "North Star", the "Carysfort" and the "Sappho", to Ottoman ports throughout the Eastern Mediterranean during the final years of the reign of William IV and the early reign of Queen Victoria. Burns's ships frequently called at Constantinople, Pera and Tarabya, but also anchored at Tunis and Algier, as well as Alexandria (on Christmas Day 1840). Several of his brief entries tell of encounters and relations with local governors and dignitaries: "[3 Aug. 1837] Received the Persian Ambassador on board"; [8 Aug. 1837] Received French Ambassador on board"; "[14 April 1838] On board. Turkish frigate and brig arrived with the Pasha of Tunis". When passing the castles on the Dardanelles on 18 Nov. 1837, the ship "fired 19 guns", and upon entering Constantinople on 7 June 1837, the vessel pays its respects to Sultan Mahmud II: "Sailed from Therapia to Constantinople, manned yards and fired a Royal salute on passing the Sultans' Palace [...]". Upon their return to Tarabya a few months later, Burns remarks on the celebration of the Sultan's birthday: "[11 Dec. 1837] Sultans Birthday, lett [?] off rockets in the evening". When news of the Sultan's death reaches the ship less than two years later, Burns notes: "[29 June 1839] Uncertain reports of the death of the Sultan", and "[2 July 1839] Reports confirmed of Sultan Mahmouds death aged 69 reighned [!] 31 years." Burns also provides accounts of several military events, mentioning an "Insurrection at Pera, lying off it" on 10 August 1837, or the Battle of Nezib on 24 June 1839. Burns's training as a surgeon is called upon: "[11 Dec. 1836] Captain came on board, mastered, in the evening corporal of Marines broke both bones of leg immediately above ankle". Not always is Burns able to apply his medical skills with success: "[19 Dec. 1836] man killed by falling from the Mainmast head through lubber hole into the Basin"; "[18 Mar. 1837] Cook died of disease of chest". Yet the diary also gives evidence of many less sensational episodes of everyday life aboard ship, containing remarks about dinner, lesser illnesses, and weather conditions. Other entries cover leisure activities such as walks ashore ("[21 July 1837] On shore of Sultan's Valley, had a Turkish bath"; [5 Dec. 1837] Went to Stamboul Bazaars, Galata, Pera") and visiting such sights as coastal castles or the ruins of Pompeii. Burns's allegiance to the British crown is always evident: "[14 July 1837] Fired 72 minute guns in the afternoon on the news of the death of the King which happ. on the 19th June", "[28 June 1838] Entered Toulon and celebrated the Queen's coronation", and "[15 July 1837] fired a royal salute in honour of the accession of Queen Victoria".

Burns joined the H.M.S. "North Star" on 1 Sep. 1836, sailing from Rio de Janeiro to England. Other voyages took the keeper of this diary further into the western Mediterranean, including the ports of Naples, Malta, and Barcelona.

Later notes and calculations on the final leaves and the insides of the covers; newspaper clippings on the lower paste-down announce the death of Burns's infant son in 1859 as well as the birth of his daughter in 1857 and of another son in 1860. A newspaper clipping announcing Burns's passing on March 10 [1894] is pasted on the flyleaf. Upper cover creased, occasional very minor paper flaws to edges, but in all a charming survival. 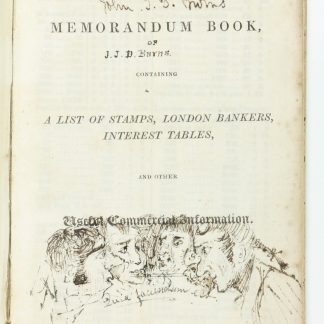