Important letter in French, to Sophie Duvaucel, about Manzoni's "Promessi Sposi" ("The Betrothed"). Stendhal is to receive the third volume of the novel from General La Fayette: "There is a problem, it does not exist, or at least M. Manzoni only published the first half of this third volume. He thinks his novel is boring and it is said that he will not finish it. […] Mr. Ugoni from Brescia is the man in Paris who could most probably purchase the first half of the third volume for you. Mr. Fauriel, the only scholar in Paris who is not pedadantic, the old friend of Mme de Condorcet, is a close friend of Mr. Mazoni and has 'Gli Sposi' translated for a Mr. Trognon. This Mr. Trognon is the brother of the tutor of Monseigneur the Count of Beaujoulais or the Prince of Joinville, or it is the tutor himself. The princes live at the royal palace. Mr. Fauriel visits Mlle Clarke, where Mme Alexander could speak to him […]" (transl.). Though Stendhal made references to Manzoni's novel in Rome, Naples and Florence, its success probably displeased him. In his "Mélanges de littérature", Stendhal characterizes Manzoni as "excessively devout" and writes that "The Betrothed" are "overly praised", although he recognizes the book shows the existence of "Bravi" during the Spanish Government.

Sophie Duvaucel (1789-1867), daughter-in-law of Georges Cuvier, was one of the most endearing figures of the group of the "Jardin des Plantes". She assisted the naturalist in his works. 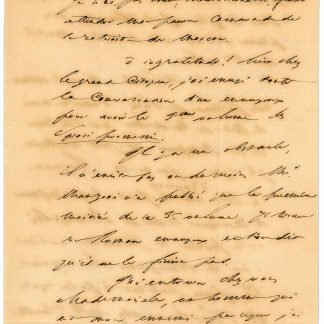