Author's presentation copy, inscribed to a member of the International Socialist Bureau

Presentation copy, inscribed by the author: "Seinem Paul Singer Ld. 12.4.91. F. Engels." First edition of Engels's brochure against Brentano, inscribed in the week of publication to the Chairman of the Social Democratic Party, Paul Singer (1844-1911).

"This work consists of six chapters of exposition (in MEW 22:95-133) followed by a number of documents: excerpts from M’s Inaugural address (#M397) and from Capital, vol. 1; reprints of #M737 and #M738 (M’s replies to Brentano); the exchange between Eleanor Marx and Sedley Taylor in 1883-1884 (for which see Y. Kapp’s Eleanor Marx, 2:725); excerpt from #E602 (a preface to Capital by E); and finally the text of #E374 (which is not found elsewhere in MEW). Also reprinted in this work are documents by Brentano and his supporters" (Draper, The Marx-Engels Register).

Singer, orphaned at a young age, was a draper’s clerk, and together with his brother established the Singer ladies’ coat factory. "At first a supporter of J. Jacoby’s left liberals, he joined the Social-Democratic party in the early 1870s - secretly until 1878 when the Anti-Socialist Law was imposed; made large financial contributions. Elected to the Berlin city government (1883), he emerged as an outstanding administrator; elected to the Reichstag (1884); member of the party Central Committee (1887), its chairman (1890); also presidium member at international congresses; member (1890) of the International Socialist Bureau, Brussels. Singer was not a public figure but a capable administrator and organizer, who in politics followed Bebel’s lead; despite his notable practicality, he opposed Revisionism to the end" (Draper, The Marx-Engels Glossary, p. 193).

Engels received copies of the present pamphlet before 10 April 1891, and between April 10 and 15 he sent copies to Sorge, Fisher, Niewenhuis and other friends and correspondents, including the present copy to Singer, who on April 2 had written to Engels, reminding him to send Bebel greetings on his silver wedding anniversary.

Spine defective, remains of paper label to front board; dampstain to upper margin and a lesser stain to lower margin, central vertical crease, presumably caused by folding for mailing before binding; inscription lightly abraded, but still very legible; a very good copy with a splendid association. 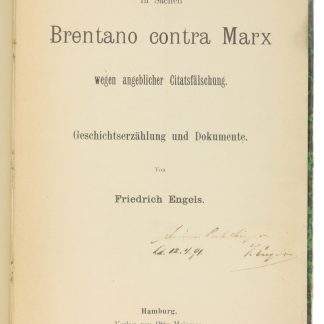