Churchill, Awnsham & John. A Collection of Voyages and Travels, Some Now First Printed from Original Manuscripts.

Third and best edition of this important and profusely illustrated collection of travel reports, compiled by the brothers Awnsham and John Churchill, based on Hakluyt and Purchas. It includes the accounts of Martin Baumgarten (Egypt, Arabia, Palestine, Syria), Thomas Roe, Philipp Balde and Johan Nieuhoff (East Indies, including a detailed account of the north-eastern coast of Arabia, with a description of pearl fishing in Bahrain and mentioning Julfar, Qatar, Sir Bani Yas, Dubai, Sharjah, Ajman, Ras al-Khaimah, Amalgavine, and other places of interest along the coastline), J. Gemelli Careri (Turkey, Persia, India), Nicholas Rolamb (Constantinople), John Barbot (West Africa, with a chapter on "Mahomet and his Alcoran"), as well as of Yemen and various journeys to China, Korea, Greenland, Iceland, Africa, North and South America (including Columbus).

"This is a very valuable collection, both for its range of coverage and for the fact that it gives the original accounts [...] The third edition is considered to be best because of its greater inclusiveness and its copious index" (Hill). Two further volumes were issued separately in 1745, republished in 1752.

The count of the illustrations is notoriously complicated: the "List of the Copper Plates" counts 305 illustrations and maps, of which as many as four are placed on a single plate, and some are placed within the text. Compared to this list, the present set lacks 52 illustrations, or ca. 20 plates, whereas the first volume contains 5 additional plates not called for in the List. Three of the maps (Africa, Asia, America) which the List announces for the first volume are in fact bound in volumes IV-VI. The introduction, a "History of Navigation from its Original to this time", is likely one of the final works of the philosopher John Locke, whose publisher and financial manager Awnsham Churchill had been (while the attribution has been called into question, the text was included in Locke's Complete Works). 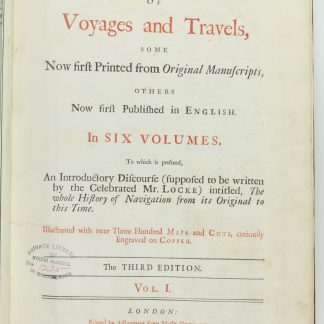