With an autograph letter signed by Fourier

First editions of Fourier's principal work, together with the very rare supplement. The first volume is signed by Fourier on verso of the half title. This is Fourier's most important work, containing "the essence of Fourier's doctrine" (D. O. Evans, Social Romanticism in France 1830-1848, p. 129.) The main thesis of the work is the discovery of "harmonie": the entire work endeavors to prove how this harmony can be established and how life and society should be designed so as to ensure success. In an attempt to garner further attention for his ideas, he published the "Sommaire du traité" in 1823, a supplement often lacking. Indeed, the work went virtually unnoticed. Although Fourier is often seen as a dreamer and fantasist, he anticipated Marx in many of his ideas: the theory of poverty and exploitation and their relation to the means of production can already be found with him, and the Marxist concept of the "all-round man" is an idea on which Fourier elaborately worked and which is the most important result of his "harmonie". Fourier was "emphatically a serious social thinker who contributed much of permanent value, not only to socialist and co-operative ideas, but also to the solution of the entire problem of work and of the incentives and human relations connected with it" (cf. Kolakowsky, History of Marxism; Quack, de Socialisten, and G. D. H. Cole, A History of Socialist Thought). Numerous Fourierist communities were established, chiefly in the United States, where the way had been prepared by Robert Owen. Fourierism was introduced to the U.S. by Albert Brisbane, whose "Social Destiny of Man" appeared in 1840. Brisbane had studied in France under Fourier in 1834. In 1842 the New York Tribune, then edited by Horace Greeley, placed at his disposal a column in which for over a year he popularized Fourier's doctrines. 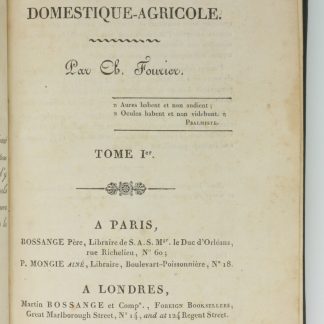