Building the largest masonry dam in the world

[Aswan Dam Construction]. A collection of more than 250 vintage photographs of the construction of the Aswan Dam.

A total of 267 photographs of construction work on the Aswan Dam. Comprises 190 large photographs (ca 25 x 30 cm), frequently with captions in the negative, mainly by D. S. George but also including A. Gianny and G. Kemble Bolam of Cairo (56 tipped in to an album and captioned, 21 loosely inserted within another album, 108 stored loosely within a portfolio, and 5 separately matted). Also, 77 smaller photographs (gelatin prints) of the dam and its environs, ca 15 x 18 cm (including a few duplicates), in an envelope.

An impressive collection of photographs detailing the construction and opening of the Aswan Low Dam between 1899 and 1902 and of the work to raise it in 1907-1912. The images (frequently captioned in English on reverse) include views of the navigation channel in various stages of completion, the countless hundreds of local workers toiling in the unfinished West Channel and on the masonry of Bab el Maroum, the locks, trenches, Asyut Barrage, the accumulator house, the inauguration ceremony, but also a friendly football match between the "10th Soudanese Regiment (Blacks)" and the "Whites" (final score: Blacks 0, Whites 5). A stark panoramic shot shows the solar eclipse of 28 May 1900 above the Mohammed Ali Channel, seen from Awad.

Owing to its rainless climate Egypt has always depended on the annual flooding of the Nile for irrigation. The Aswan dam was designed by eminent British engineers to provide storage of annual floodwater and to augment dry season flows; construction about 1000 kilometres up the river from Cairo was begun in February 1899 by the London-based contractor John Aird & Co. Nothing of its scale had ever been attempted; on completion, it was the largest masonry dam in the world. It created an artificial lake extending 200 miles up the valley, partly submerging Ptolemy's temple on the island of Philae. The 1.25 mile-long dam with 180 sluice gates cost 3 million pounds sterling. It was opened by the Khedive on 10 December 1902. Originally limited in height by conservation concerns, the dam worked as designed but provided inadequate storage capacity for planned development and was raised between 1907 and 1912. The heightening still did not meet irrigation demands, and in the 1960s the Aswan High Dam was built 6 kilometres upstream.

A few nicks along the edges, some gelatin prints somewhat faded and with occasional creases. Mats generally foxed, with some foxing to the matted images, but on the whole an outstandingly preserved ensemble printed in rich, crisp detail. 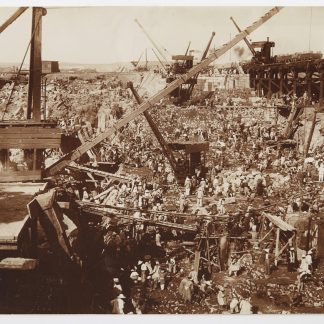