The Most Powerful Book of the Century

First edition: a fine copy of one of the most influential books ever published. The exceedingly rare first volume was the only one to be completed by Marx in his lifetime, while the second and third volumes were completed posthumously by Engels from Marx's papers (1885 and 1894). "The history of the twentieth century is Marx's legacy [...] Within one hundred years of his death half the world's population was ruled by governments that professed Marxism to be their guiding faith. His ideas have transformed the study of economics, history, geography, sociology, and literature" (Wheen). "Marx himself modestly described 'Das Kapital' as a continuation of his 'Zur Kritik der politischen Oekonomie', 1859. It was in fact the summation of a quarter of a century's economic studies, mostly in the Reading Room of the British Museum" (PMM).

Stamp of the Würzburg Volksbildungsverein on title page (slightly trimmed at bottom during rebinding ca. 1900). Occasional slight staining to edges near beginning, not touching text; a few pencil annotations by an economic scholar, ca. 1900. Altogether a tight, well-preserved specimen. 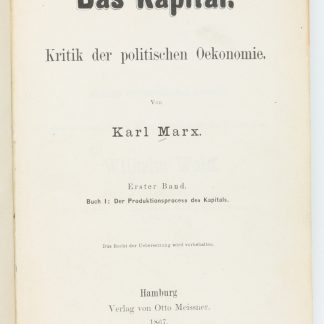