A photographic pioneer in the Middle East, "the first completely realized photobook" (Parr/Badger) ever published

A young man of independent means, Du Camp learnt the craft of photography from Le Gray in 1849 in preparation for his second journey to North Africa. By the time he came to Abu Simbel in March 1850 to explore the rock-cut temples built by Ramesses II (reigned 1292-1225 BC), Du Camp was thoroughly at ease with the medium. With official backing from the French Government, and travelling in the company of the novelist Gustave Flaubert, Du Camp returned with over 200 paper negatives of the antiquities of Egypt and the Near East, of which 125 were published in the present work. The illustrations were produced at the photographic printing works of Louis-Désiré Blanquard-Évrard at Lille and their distinctive cool neutral tones are due to the prints being chemically developed rather than merely printed-out in sunlight.

Distinguished as it was, Du Camp’s photographic career was short-lived. After the completion of his magisterial survey of the antiquities of the Near East, he abandoned photography entirely in favour of literary pursuits.

Soundly bound, presenting well on the shelf. Front hinge slightly cracked towards the head at the first blank, some very light foxing throughout, but altogether an excellent copy. 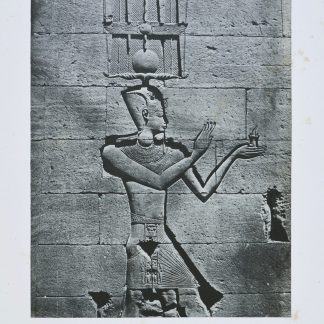