Presentation copy of an early work on musical theory, no copy recorded at auction

Rare first edition, of which just a few copies survive: the author's presentation copy, a partly erased inscription at the end reading "Munus Autoris [...] An 11, 7 martii [...]". Quercu was choirmaster to Duke Ludovico Sforza of Milan and accompanied his two sons as a tutor to the court of Vienna. The present treatise, a famous and highly original book on musical theory for young scholars, was probably used in the musical education of the duke's sons. "The first part, 'Musica plana', deals with the modes, intervals, note names, solmization and solmization syllables, and mutation. The second part, 'Musica mensuralis', deals with note lengths, rests, ligatures, mensuration signs, alteration, imperfection and mensural proportions. The third part, 'Contrapunctus', considers consonances, dissonances and polyphonic writing. His teaching is illustrated with many music examples" (New Grove). The finely printed book includes on p. (4) the Guidonian hand, named after Guido of Arezzo (992?-1050), who introduced into music theory this mnemonic device to help teach singers learn to sight-read. Each portion of the hand represents a specific note in the hexachord system; during instruction, a teacher would indicate the series of notes by pointing to them on their hand to have the students sing them.

Light washing traces. Inscription recording "A gift from the author, 7 March [15]11", on the final page. German dealer’s catalogue clipping bound in before title. A monogram stamp on the lower pastedown identifies the collection of Otto Schäfer in Schweinfurt (purchased in 1958). No auction record for this edition (and only one for the second edition; cf. ABPC/RBH). USTC lists 5 copies only held in libraries including this copy. 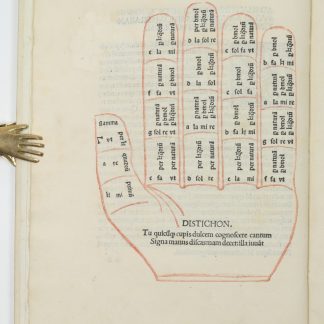