One of the fundamental sources for the Ottoman conquest of Cyprus in 1571, when the Turkish forces invaded the island with 400 ships and some 100,000 men, massacring Nicosia's 20,000 inhabitants. Thus wrested from the Venetians, Cyprus would remain under Ottoman rule until 1878, when it was ceded to Britain as a protectorate; Ottoman sovereignty continued until the outbreak of World War I.

A. M. Graziani (1537-1611) studied the law at Padua before becoming secretary to Pope Sixtus and, in 1592, bishop of Amelia (in Umbria). Pope Clement VIII sent him as his nuncio to the Italian princes and states to unite them in a league against the Ottomans. Graziani having died in 1611, his account was published only posthumously: it was edited by his son Carolo, who dedicated the book to Cardinal Francesco Barberini, nephew of Pope Urban VIII. Barberini was created a cardinal in 1623; in 1627 he became librarian of the Vatican, and in 1632 vice-chancellor. The engraved architectural title (by Claudio Mellan after Antonio Pomeranci) shows History, "magistra vitae", seated atop an elaborate Baroque structure which incorporates Barberini's arms. This is the dedication copy bound for Cardinal Barberini himself: both covers show the crowned bee arms of the Barberini family on dark green leather, enclosed within borders of blind rules and double fillets with corner fleurons and two different bee cornerpieces, all set within a wide floral border and double gilt fillets. Even the spine is richly decorated with bee tools running up and down between a floral railing. 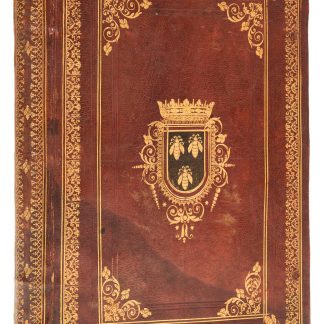