Re-establishing the Peace with the Algerian Corsairs in 1666

Rare official account of the French diplomatic expedition to Algiers undertaken in January 1666 by lieutenant general Damien Martel to re-establish the peace between Louis XIV and the Barbary Coast.

To protect the French merchant fleet from North African corsairs, but also inspired by the mercantilist theories of Jean-Baptiste Colbert, who strove to expand French commercial capacities abroad, the King had in 1664 sent an expedition under the Duke of Beaufort to Djidjelli in north-eastern Algeria. There, the French had sunk several corsair ships, seized the city and begun expanding the port into a permanent naval base. Algerian pirate commandos, however, soon retook the city, destroyed the French works and sold the surviving Frenchmen into slavery. Indeed, the Djidjelli expedition had achieved nothing for France but to serve as a convenient excuse for the Ottomans to charge Louis XIV with having breached the peace. While the Porte declared that they would not hinder the French in pursuing the corsairs, it was made clear that the Sultan would not permit Louis to take possession of the coastal cities and ports of Barbary. The French did not attempt to re-establish themselves in Africa; rather, they sent punitive expeditions throughout the Mediterranean to rout whatever corsair ships they could find, thus finally driving the Pasha of Algiers to accept a new peace treaty. In early 1666, Martel was dispatched with a fleet of 17 ships (including three "brûlots", or fireships); the pamphlet discusses his self-assured entrance to Algiers and the subsequent delicate negotiations that renewed the diplomatic accord between two nations.

An uncommon work; we have located copies only at the Bibliothèque Ste. Geneviève in Paris, the University of Oxford, British National Archives, and Bibliothèque Nationale, the latter two with title spelling 'Succincte'. Some duststaining, especially to the wide, untrimmed margins, but still a well-preserved copy. 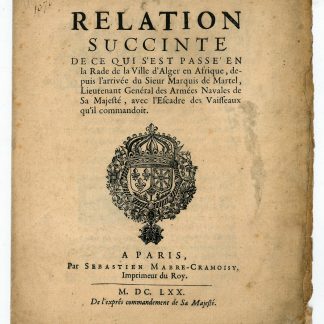