4to. (7) ff., 1 blank f., (4) ff. With woodcut device on title, large historiated woodcut initials, and an additional engraved folding plan of Tripolis (204 x 285 mm), not called for by bibliographies. 18th century full vellum with giltstamped red morocco label to spine (very similar to the bindings done for the Venetian library of Giacomo Soranzo).

First dated publication of Ulloa's account of the siege of Tripolis in Italian. Includes the three-page dedication to Johann Jakob Fugger - the only place in the book where Ulloa's name appears. The author, a courtier of King Philip II, celebrates the defence of St Angelo's fortress on Malta, modern Libya.

In the 1551 Siege of Tripoli, the Ottoman fleet vanquished the Knights of Malta in Tripoli; the city was captured on 15 August by Sinan Pasha after six days of bombardment. The knights, many of them French, were returned to Malta upon the intervention of the French ambassador, and shipped onboard his galleys, while the mercenaries were enslaved. Murad Agha, the Ottoman commander of Tajura since 1536, was named as the Pashalik of the city. The siege was the first step in the all-out Italian War of 1551-59 in the European theatre. In 1553, Dragut was nominated commander of Tripoli by Suleiman, making the city a centre for piratical raids in the Mediterranean and the capital of the Ottoman province of Tripolitania. In a famous attack from Tripoli, in 1558, Dragut attacked Reggio and took all its inhabitants as slaves to Tripoli. In 1560, a powerful naval force was sent to recapture Tripoli, but that force was defeated in the Battle of Djerba, an event also described in Ulloa's book. The end of the volume is brought up by an interesting four-page account of Malta ("Descrittione dell'Isola di Malta") and a list of the names of Christian knights who died in the siege. The fine engraved plate bound after the preliminaries, entitled "Il vero disegno del porto, della città, della fortezza, et del sito dove è posta Tripoli di Barbaria. Ven. l'anno 1567 alla libreria della Colonna" appeared a year after the book. It is engraved by Paolo Forlani. 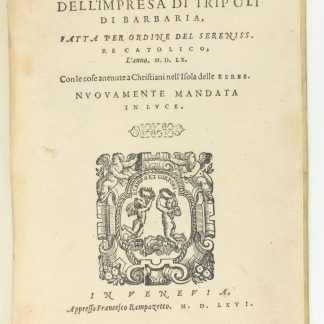