A collection of maps from the famous Danckerts atlas, created around 1685 and compiled in this version in the late 18th century. The volume contains 28 maps by the Dutch engraver and publisher Justus Danckerts (1635-1701), including a world map showing the Eastern and Western hemispheres, maps of Europe, Asia, Africa and America, as well as maps of Spain, France, Italy, Great Britain, Germany, the Netherlands, Belgium, Bohemia, Hungary, the Balkan Peninsula, Greece, and Poland. The views show various cities in Hungary and Greece, also including Constantinople. There are three maps not originating from Danckerts: a postal map of Germany published in Augsburg by Matthias Seutter; another showing the Holy Land, by Guillaume Sanson; and the third showing the Habsburg empire in 1781, which suggests the terminus post quem for the compilation of this volume.

Lacks a title-page. With 19th century bookplate of a member of the Lasser von Zollheim family, probably Johann Baptist (1822-89), librarian and later the abbot of the Benedictine abbey of Lambach in Upper Austria. A handwritten table of contents on the reverse of the first map; each map numbered by hand. On the back of the maps of France and Poland is a list of field marshals who served under Napoleon. Handwritten bibliographical notes to flyleaf.

Binding rubbed, spine-ends bumped. Paper variously brownstained and fingerstained. A few remarginings with slight loss of text. From the library of the Viennese collector Werner Habel with his signed and stamped ownership, dated 1978, to pastedown. 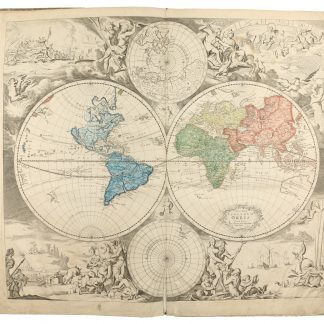