The first distance-time route map of the Ottoman Empire, one of the great masterpieces of Ottoman thematic cartography. Devised by the General Staff of the Ottoman Army and depicting the entire realm of the Sublime Porte from Albania to Yemen, it gives travel times between hundreds of locations, including various routes of the Hajj.

The map captures the scene during the middle of the rule of Sultan Abdul Hamid II (reigned 1876-1909), during which the empire still controlled vast territories in Europe, Asia and Africa, extending from the Balkans to the Arabian Peninsula. It is centred upon Anatolia but includes all the core regions of the Empire, extending from Bosnia in the northwest to the head of the Arabian Gulf in the southwest, and from Crimea and Baku in the north and east to Lower Egypt in the southwest. In the lower right corner is an inset capturing the western Gulf, including Kuwait, Bahrain, and Qatar; an inset above details the Red Sea, including Hejaz, Asir and Yemen; a larger inset in the lower left depicts Ottoman Libya as well as parts of French Tunisia and Algeria. Annotated in Ottoman Turkish throughout, the map is traversed by hundreds of lines that connect every city and town of importance, representing the main land travel routes between these centres; each segment states the estimated travel times between the points. The map also features a chart comparing distances between the principal centres: on average, the chart shows, it took 18 hours to travel from the Red Sea port of Jeddah to the holy city of Mecca.

This is the first map ever to display the distances between all significant travel points in the Ottoman Empire and would have been vitally useful to soldiers, merchants, and government bureaucrats planning their itineraries. It was also one of the only maps to give an approximately accurate notion of the times and distance along several of the most important Hajj routes, including the famous Syrian Hajj Road from Damascus to Mecca, now considered by UNESCO for World Heritage Status.

Transportation had always been one of the great challenges confronting the Ottoman Empire, an astoundingly vast realm spanning three continents and traversing some of the world's most rugged terrain. Yet the Hamidian Era marked a period of rapid modernization, including the creation of macadamized highways, railways and modern ports, and saw the rise of sophisticated cartography. The General Staff was able to draw on exhaustive highway surveys and recent itinerary records. The present map also depicts the rapidly expanding Ottoman railway system, after a wave of development had revolutionized travel in the empire's European domains, but just before an unprecedented boom in railway construction would do the same for Ottoman Asia. The Balkans are traversed by several railways: most notably as of 1888 the great port of Salonika was connected to the rest of Europe by rail, while Istanbul was linked to the European system for the first time that same year, providing the direct route for the famed Orient Express, which commenced in 1889. One will also notice the first great leg of the Anatolian Railway that connected Istanbul to Ankara on 31 December 1892, completed only a matter of weeks before the present map was issued.

Although Ottoman cartographers were producing topographic and thematic maps of the highest sophistication and diversity, every bit as impressive as those of the best German and French and British mapmakers, these works tend to be very rare today and are not nearly as well known as they deserve to be: they were almost invariably issued in small print runs, and maps intended for practical use in the field, such as the present work, tended to perish easily. Also, Turkey's switch to the Latin alphabet, in 1928, ensured that many of the surviving earlier maps were discarded, making this specimen a rare survival of an historic cartographical achievement. 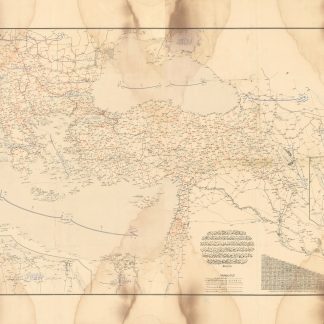