Vernay's poetry in French, Turkish, Persian and other languages: unrecorded Royal folio issues dedicated to the Ottoman Sultan Abdulmejid I and with extensive additions

Unrecorded royal folio issues of two major editions of oriental poetry, bound together and with extensive supplementary material added, probably for presentation to the Ottoman Sultan Abdulmejid I: the first and only edition of the collected oriental poetry (195 pieces) of the French child prodigy orientalist, linguist and poet Charles Vernay; and the earlier lithographic edition of his 141 Turkish and Persian poems. In the former work, the Turkish and Persian poems are rendered both in the Arabic script and in French translation. It also includes a few poems in Italian and German. Even the 8vo issues of these two editions are very rare. The present Royal folio issues of the two main works were clearly never offered for sale.

Charles Vernay (1842-1866?) began publishing his writing at age nine and most of the present publications note the age at which he wrote them, ranging from 9 to 16. When Vernay was in Istanbul in 1861, he wrote a new dedication for the 1860 Poésies nationales et religieuses, addressed to the Ottoman Sultan Abdulmejid I, though Vernay had it printed in Paris. It explicitly notes that he is presenting a copy of "mon volume de Poésies Françaises, Italiennes, Turques et Persanes" to the Sultan. This suggests that the present copy of the two works together, with that dedication and many other additions, is the copy he planned to present. Since the dedication is dated 14 March 1861 and the supplementary Dixième chant mystique (also printed by Lainé and Havard) 20 April 1861 (only 2 months before Sultan's death), it is possible the Sultan died before Vernay had an opportunity to present the book to him. In addition to the extensive additional material inserted in the Poésies nationales et religieuses, and the supplement to the Poésies Turques et Persanes, the present copy has about 15 miscellaneous publications by Vernay bound between the two main works, some letterpress, some lithographic facsimiles of his autograph manuscripts in French, Turkish and Persian, and including a 1-page autograph manuscript in Persian. Some occasional foxing and an occasional marginal tear. The ink in the 5 lithographic facsimiles of very large Arabic script has eaten a few holes in the paper, and it and a few other lithographed leaves have offset onto the facing pages. But the book remains in good condition. The binding is worn at the hinges, shows some superficial damage on the front board near the fore-edge, and the first free endleaves at front and back have been creased and at the front its silk has been torn and repaired, but the binding also remains good and with the tooling clear. 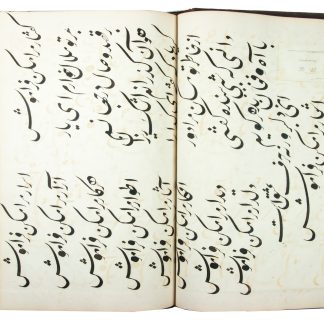