One of the earliest Chinese texts to be printed in Europe, a landmark in lithographic printing

The doctrines of the Chinese philosopher Mengzi (fl. 300 BC), the principal successor to Confucius. This is one of the earliest Chinese texts to be printed in Europe and a landmark in lithographic printing. The Chinese text here is complete in two parts. Lasteyrie had produced a Latin translation by Stanislas Julien (1797-1893) in 1824-26 ("Meng tseu, vel, Mencium inter Sinenses philosophos ingenio, doctrina, nominisque claritate Confucio proximum"), and while the Latin text is not particularly rare, the lithographed set (which was to serve as a supplement) is very much so. The plates were lithographed by the Comte de Lasteyrie, Charles Philibert Lasteyrie du Saillant (1759-1849), an innovator in lithographic printing in France. He carried out the work at his own cost.

Title-page browned and laid down, pp. 150ff. have a stain affecting several leaves, p. 162 patched. Much of the text is remarkably fresh and the binding is entirely solid. Incorrectly stamped 'Confucius' on the spine. Provenance: bookplate of George May Elwood (1844-1906) on rear pastedown (designed by Harold M. Ellis, dated 1898), his label on the front pastedown. 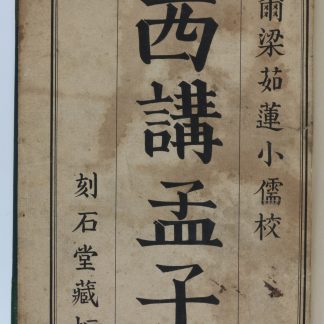