Contracts, four of which drafted by Lachâtre, stating his sale of the plates for the "Histoire de la Bastille" by Arnoult, Alboize and Maquet to Mme Languet (21 June 1881), of "N’a-qu’un-œil" by Cladel and of Marx's "Le Capital" to Auguste Milbert and his wife Mme Bonaventure-Milbert (31 Dec. 1882), of the "Histoire de la Bastille" and "Histoire du Donjon" by Arnoult, Alboize and Maquet to William Heiss (31 Dec. 1882), as well as the plates and copyright to the "Dictionnaire universel de Lachâtre", the plates of the "Mystères du peuple" by Eugène Sue, as well as a large stock of books (sewn or unbound) to Henry Oriol (31 Dec. 1882).

Cession of the bookshop "Librairie du Progrès", up to this point owned by Henry Oriol and Mlle Marie-Ange Garrette, to Lachâtre and others (31 Dec. 1885). Second leaf somewhat brownstained.

Contract in duplicate between Lachâtre, Marie-Thérèse Garrette and the other shareholders of the "Librairie du Progrès", stating that copyright and licence fees will not be paid in cash, but transferred to the respective accounts of Lachâtre and Garrette for a period of at least three years (26 Aug. 1886).

Two postcards addressed to Lachâtre, one by the Lisbon publisher Joaquim Gonçalves Pereira, expressing his opinion on the engravings sent to him (22 Nov. 1892), the other by an unidentified Belgian bookseller, asking for several pages of Lachâtre's dictionary (1 Sept. 1897).

Letter by the paper manufacturer George Gratiot & Cie, probably to Lachâtre, about archival files the addressee had sent him (6 March [?] 1886). On headed stationery.

Letter by an unknown writer giving an inventory of the "Dictionnaire Lachâtre" (27 May 1921).

Furthermore, the statutes of the "Librairie du Progrés", in duplicate (4to, 4 pp. on 2 bifolia), as well as 6 blank 4to leaves of the bookshop's headed stationery. 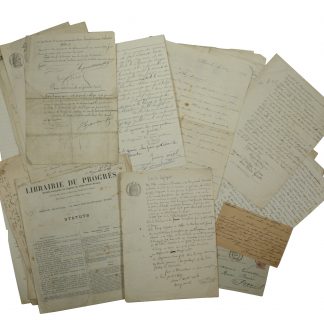