The Jewish insurgency in Mandatory Palestine: "Only your reluctance to be killed for their faults will teach the Government that it is up to them to clear the position"

Oblong folio (242 x 307 mm). 285 original photographs (27 loosely inserted, sizes 160 x 397 mm and smaller) mounted on 59 leaves, together with newspaper clippings, letters, orders, settlement search map, Christmas cards and sport programme. Blue half morocco. Together with two other albums containing 332 photographs, mostly relating to Poole's family and his time in India, an official letter from the Lord Chamberlain informing him of his award of the CBE in 1949, and large-format loose portrait photograph.

An exceptional album containing a wide range of large-format images compiled by the Commanding Officer of 3 Brigade of 1st Infantry Division during the end of British rule in Palestine. The events documented take place before the background of the growing insurgent activity of Jewish paramilitary groups such as the Irgun, Lehi, and Haganah and the bitter Jewish-Arab fighting foreshadowing the 1948 Arab-Israeli War, immediately prior to the expiration of the British Mandate and Israel's Declaration of Independence.

The album begins in 1945/46 with a Rifle Meeting in Egypt before moving to Haifa and the establishment of Brigade Headquarters at the Lev Carmel Hotel. Several important photographs show the illegal immigrant ships in Haifa docks, with press clippings of "Operation Agatha" and the King David Hotel bombing, and associated photographs and maps culled from G.H.Q. Middle East Land Forces Weekly Intelligence Briefings, showing Jewish settlement searches, arrests of insurgents, discoveries of arms caches and Athlit Detention Camp for suspect terrorists. Other operations to curtail Jewish attacks are shown, including those of "Igloo" and "Elephant".

With regard to the Arab population, there are some large-format images of the parade and "Presentation of the Ramad Gun to Nablus June 1947", which appears to be a large public relations exercise, and the "Programme of Visit of HM King Abdulla of Transjordan to 3rd Infantry Brigade", contrasting with photographs of the demolition of an "Arab's sniper's nest in Manshiya". There are photographs of major military exercises in Transjordan, as well as a visit with the Commander-in-Chief across the Allenby Bridge, while Poole himself can be seen directing operations involving tanks and infantry on the Mediterranean sea front. An original propaganda leaflet by the Irgun Tsvai Leumi warns British soldiers to "avoid getting mixed into the trouble with this country's men" rather than "risk [their] life every day so that the Government may have 10 more years to make up its mind to clear out of Palestine" ("picked up in Nathanya Mar, 1947"). The lighter side of the British officer's command, living under the frequently documented threat of death by mortars, bombings, and landmines, is reflected in a snapshot of Poole taking a dip in a lake (pasted above a "remarkable photograph" showing the burning King David Hotel) and the Monty-Pythonesque "Standing Orders" for the 3rd Brigade's "Goldfish Squadron" ("Intimidation of the Goldfish by tapping the glass sides of the tank or by making faces or by violently disturbing the water is forbidden").

Poole was born into a military family and served with the King's Own Yorkshire Light Infantry from Sandhurst in 1923. During World War II he commanded a battalion and later brigades in Burma. After 1945 Poole was posted to Palestine and Egypt, where he set a record by commanding 3 Brigade of 1st Infantry Division for over five years until 1952. The following year he was appointed Aide-de-Camp to the Queen. 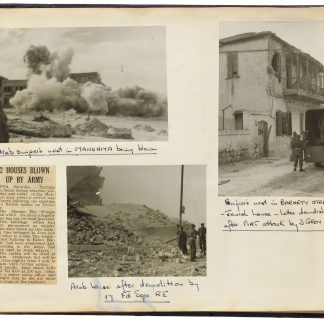