"the pernicious influence of secret societies under weak governments"

First French edition of the first extensive history of the medieval Muslim sect of the Assassins, a radical group from whose name the English term for a political or religious killer is derived. A fanatical branch of the Ismaili Muslims who viewed themselves as martyrs, the Assassins specialised in political murder (usually carried out with a dagger), often conducted in broad daylight and in full view of the public, so as to instill terror in their foes. Contemporaries found it incomprehensible that they entirely accepted the fact of their own death as a consequence, as they made no attempt to escape and exposed themselves to the revenge of the victim's followers. Acting from a strong ideological conviction, the Assassins aimed to re-establish a theocracy, the basic Islamic order bequeathed by the Prophet, as they felt their contemporary world order to be usurped by tyrants. Most of their victims were Sunni Muslims, especially the Seljuk rulers of the 12th and 13 centuries.

For this history, which first appeared in German in 1818, Hammer-Purgstall draws from a wide variety of mainly oriental sources (Ibn Khaldun, Jihannuma, Abulfeda, Persian and Turkish chronicles, with a small number of western studies included), all of which he lists at the beginning, and ultimately compares the mediaeval sect to the modern fanatics of his own day, particularly the Jacobin party of the French Revolution. Among the goals which he wishes to have achieved with his book, he writes, is to have "given an account of the pernicious influence of secret societies under weak governments". - Binding slightly rubbed; corners bumped. Removed from the Imperial Russian Military Academy with their bookplate to front pastedown. 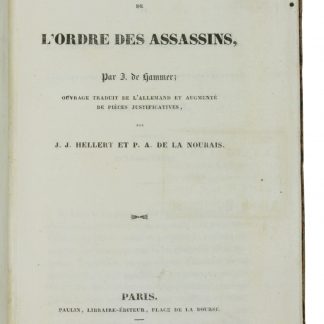