Livorno, U.S. Army Corps of Engineers, Mediterranean Division, for the Kingdom of Saudi Arabia and the Ministry of Defense and Aviation - Directorate of Military Works, May 1977.

The Master Plan Drawings for an enormous, never-realized Medical Center which the U.S. Ministry of Defense and Aviation (MODA) aimed to build for the Saudi Arabian Army near Al-Kharj, some 70 km south of Riyadh. Part of an ambitious programme to develop major military medical facilities at Mecca and Riyadh, the project quickly expanded, at the Saudis' request, from a 400-bed hospital in the capital to a massive 600-bed medical center far outside Riyadh with acute care, teaching and research facilities, involving the planning of a small medical city near Al-Kharj with a population of some 15,000 people. The architects whom the U.S. Army Corps of Engineers tasked with the development were Ellerbe and DMJM (Daniel, Mann, Johnson & Mendenhall), two concerns with extensive and international experience in designing medical facilities. By 1976 the cost estimate for the Al-Kharj center had risen to no less than $4.1 billion; in February 1977, the completed master plan was presented to Prince Turki bin Abdulaziz in Riyadh. He appeared pleased but had already suggested that funding might need to be drawn out over a period of 20 years. In early 1978, all funding was abruptly withdrawn, and the architects' design work was brought to an unexpected end before any construction work even began. Today, the desert site north of the highway at Al-Kharj remains as bleak and empty as it appeared in the 1970s.

The present set of ground plans, elevations, and three-dimensional renderings, one of a small number of Master Plan sets produced in 1977 shortly before the programme fell through, shows the extent of planning reached, as well as the humongous scale of the project. A unique survival, and a poignant document of MODA's apparently limitless "willingness to build facilities to modernize every aspect of the Saudi Arabian military structure" (Grathwol/Moorhus, p. 394) at a time when increasing oil revenues redefined the limits of the possible.

In excellent state of preservation. 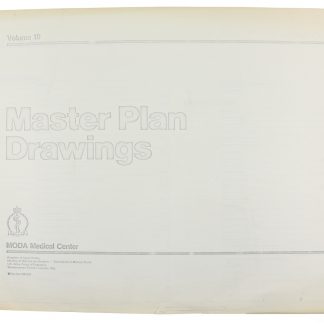