From the secret personal papers of General Sarrou

Mainly Near and Middle East, mainly 1917-1923, with earlier and much later supplementary material.

Various sizes (folio, 4to, 8vo). A total of 460 typescript and 177 manuscript pp. (9 of which comprise merely 2 lines) in 26 fascicles, assembled as 11 portfolios. With a few newspaper clippings as well as 1 photograph each of Hagia Sophia and the gate of Dolmabahce Palace, mounted on cardboard as postcards.

A highly important and extensive archive from the secret personal papers of General Auguste Sarrou, France's chief spymaster in the Levant and Turkey during the critical period between 1917 and 1923, when the Near and Middle East were completely re-ordered following the demise of the Ottoman Empire. It features numerous "top secret" spy reports, correspondence and dossiers of political analysis, providing stellar insights into France's central role in shaping the destiny of Syria, Lebanon and Turkey, working to counteract the forces unleashed by Lawrence of Arabia during the Arab Revolt.

The present archive consists of dozens of classified intelligence reports, political masterplans and field notes. Most of the documents are typescripts or carbon copies of typescripts (many written by Sarrou), intended for distribution amongst only the most senior French military and political officials. The documents span Sarrou’s entire career, dating from 1908 to the 1960s, although the bulk of the documents concern the critical period from 1917 to 1923. It includes a typescript copy of Sarrou’s autobiography, written at the end of his 60-year-long career in espionage and diplomacy in Turkey, the Balkans and the Middle East; a series of papers relating to Sarrou’s time serving as a gendarme in Macedonia in the decade prior to World War I, when he notably befriended many leaders of "Young Turks"; and a further series of papers outline his secret "Mission d’Orient", a grand operation to support French ambitions in Syria, Lebanon and Anatolia. Furthermore, a series of highly important and secret analytical reports written by Sarrou provide a "game plan" for how France was to rule Syria and Lebanon (importantly, the Quay d’Orsay largely followed Sarrou’s advice as matters unfolded). Notable is Sarrou’s brutally unflattering assessment of Emir Faisal, Lawrence of Arabia’s old comrade. Additionally, there is an intriguing manuscript report of a meeting held between Arab intellectuals and Djemal Pasha, the Ottoman War Minister, the day before the fall of Damascus, as well as a series of fascinating reports concerning the 1921 attempt on the life of General Henri Gouraud, the French High Commissioner for Syria and Lebanon. Another series of 25 typescript "Secret" intelligence reports compiled by the Service des informations de la Marine dans le Levant (S.I.L.) in Port Said in 1918 and 1919 contain fascinating raw field intelligence on Anti-French elements throughout the Middle East, as well as the efforts of French assets to counteract these forces through counterespionage and propaganda. A diverse collection of typescript and manuscript research documents, as well as correspondence from key assets, assembled by Sarrou from 1919 to 1922, is supplemented by a series of highly insightful typescript reports, written by Sarrou to advise the French government on the situation in Turkey from 1921 to 1931, covering the rise of Atatürk’s new republic and French efforts to gain influence in Ankara. Finally, there is a collection of letters, documents and postcards from Sarrou’s mid to later career, from the late 1920s until his retirement in the mid-1960s.

Many of the elements of the present archive are likely unique survivors, while a couple examples of some of the typescripts may exist in various French official archives. A detailed list is available upon request. 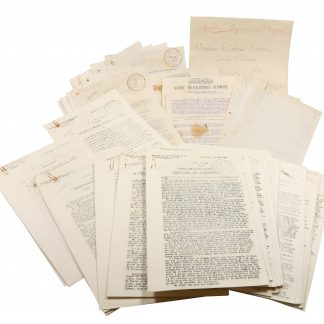