The Social Structures and Tribes of Yemen

First and only edition of this excessively rare manual on the tribal structures in the very area where the region's biggest ongoing armed conflict started in 2011. Compiled initially in 1886, the text was brought up to date in 1907 by Captain A. E. Mosse. The authors provide a chronological breakdown of the events, relationships and hostilities of each of the 16 tribes in the Aden area. In addition, the work discusses the nature of each tribe (i.e. "a proud, warlike and independent race"), their income and their organisation, with notes on sub-tribes and their reigning families. The appendix includes copies of the treaties and agreements signed between local tribes and the British, many of which led to the establishment of the British Protectorate.

Aden was ruled as a part of British India from 1839 until 1937, when it became a Crown Colony. Its proximity to Zanzibar, the Suez canal and Mumbai made it an important strategic possession in the British Empire. Hunter wrote the first account of some of the tribes surrounding Aden in his work "An Account of the British Settlement of Aden in Arabia" (1877).

Slightly rubbed and spotted. Old library shelfmarks to upper covers; some contemporary underlinings in coloured pencil. The tables are at the end of the text volume, while the maps are stored loosely in a pocket in a separate volume.

Rare. Only two copies traced at auction within the last 50 years, one of which was lacking the maps showing the tribes of Yemen and the boundaries of the Aden protectorate. 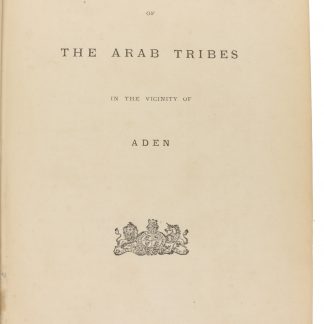