8vo. 2 pages on single leaf. Together with a portrait photograph.

"Our Fellow-Worshippers": "Deem not that thou and I / Are here the only worshippers today / Beneath this glorious sky / Mid the soft airs that o'er the meadows play / These airs, whose breathing stirs / The fresh grass, are our fellow-worshippers [...]".

According to Henry C. Sturges, the poem was written in December 1875 at Bryant's home in Roslyn, Long Island (The Poetical Works of William Cullen Bryant, p. LXXVI). It belongs to the last period of the poet's work, written less than three years before his death.

With some corrections by the author, slightly smudged, some insignificant foxing to recto. 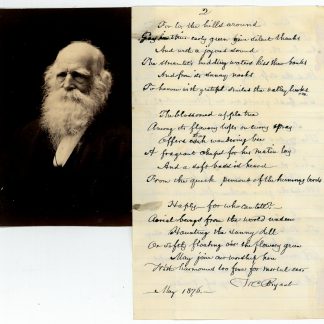