New intelligence on the first assassination attempt on Gandhi

An unpublished official document (to Frederick Sleigh Roberts, 1st Earl of Kabul and Kandahar, 1832-1914) which sheds new light on the assault on Gandhi in Johannesburg on 10 February 1908, the first attempt on Gandhi's life. Earlier that year, Gandhi had been summoned from prison in Pretoria to meet with the Colonial Secretary, General Smuts, to discuss the British treatment of Indian labourers in South Africa. Gandhi eventually convinced Smuts to allow the voluntary registration of all Indians rather than the punitive system of the "Black Act". However, this settlement did not prove popular with all Indians in the colony; as Gandhi was making his way to the Registration Office in Johannesburg, he was brutally beaten by one Mir Alam, a disillusioned Pathan: "I had scarcely finished the last sentence when a heavy cudgel blow descended on my head from behind. I at once fainted with the words 'He Rama' (O God!) on my lips, lay prostrate on the ground and had no notion of what followed. But Mir Alam and his companions gave me more blows and kicks, some of which were warded off by Yusuf Mian and Thambi Naidoo with the result that they too became a target for attack in their turn" (Gandhi, Satygraha in South Africa, p. 140). According to his own account, Gandhi immediately requested that Mir Alam and his companions not be charged or imprisoned for the assault; for, "according to their lights they could not behave otherwise than they did". Gandhi himself was philosophical about his near-fatal encounter, commenting, "As for me, nothing better can happen to a satyagrahi than his meeting death all unsought in the very act of satyagraha, i.e., pursuing Truth" (ibid, p. 157).

The present document, however, sheds new light on the assault. The letter discusses complaints received by one Mahomed Shah, "Pathan Priest", regarding the treatment of Indian prisoners. High Commissioner Selborne is dismissive of Shah, calling him an "illiterate Punjabi" and "of violent character". Most intriguingly, Selborne reveals that Shah himself "instigated the serious assault on Mr. M. K. Gandhi in February, 1908, and although Mr. Gandhi declined to prosecute he requested the government to remove Mahomed Shah from the Transvaal, where he was a source of danger to other Indians, and deport him to India." Gandhi's account of the incident holds that Mir Alam was responsible for the attack, and that although he insisted on not pressing charges, Alam was convicted by the Government of a public offence and sentenced to three months' imprisonment. The present official document suggests that the affair was more complicated than this and indeed was "instigated" by an entirely different person, and that while Gandhi did not press charges officially, he nevertheless took action against his aggressor.

Original materials relating to Gandhi's South African years - before his rise to international fame - are decidedly uncommon. It is often forgotten that Gandhi spent no fewer than 22 years of his life (1893-1915) in South Africa, promoting his practice of satyagraha to improve conditions for the large Indian population in that colony. "It is only recently that historians have come to recognise the centrality of his time abroad in Gandhi's life, and in particular, the significance of his southern African years [...] it was in southern Africa that he developed the entire spiritual, philosophical, and political programme that he would implement in India...Gandhi's political and intellectual projects, as they evolved in these years, operated across political boundaries, linking India, South Africa, and Britain itself, as well as points beyond" (Cambridge Companion to Gandhi, p. 30).

Traces of horizontal folds; slight brownstains in the left margin of the first leaf. 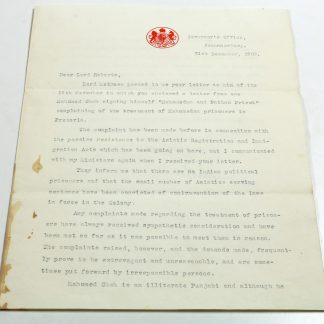