The quest for gravitational waves, helping a student, and announcing the birth of his daughter, Lucy

One of Hawking’s students, Gary Gibbons, is to attend the meeting of the American Physical Society in New Orleans from 23-25 November, "where he will report on the British work on the design and construction of gravitational wave detectors. We think that, without the use of liquid helium, we can improve the sensitivity by a factor of 100. The first of these detectors should be operating before the end of the year, and the second one at Reading should follow soon after". Hawking hopes that Gary might stay on after the New Orleans meeting to attend the relativistic astrophysics conference in Austin, with a visit to the University of Maryland in between, and asks for Misner’s help in organising this visit: [Joseph] Weber will be too busy to show Gibbons around, but Hawking notes that Gary should really see Misner and [Dieter] Brill: "he is primarily a theoretician and is interested in the problem of how much gravitational radiation would be emitted by a collapsing object". Hawking also announces the birth of a little girl, "Catherine Lucy, though we will probably call her Lucy", born a little plumper than Robert, and very well behaved.

In 2016, over 45 years after Stephen Hawking’s hopeful mention in the present letter of the gravitational wave detectors being built in England - and one hundred years after Albert Einstein first predicted the existence of gravitational waves - scientists would finally have proof of these elusive ripples in space-time: the unmistakeable "ringing" as two black holes collides was heard at the Advanced Laser Interferometer Gravitational-Wave Observatory (LIGO) on 11 February 2016. When asked for comment, Hawking said that the discovery would "revolutionise" astronomy, noting also that it had proved his calculations of 1970 to be correct: "The observed properties of this system are consistent with predictions about black holes that I made in 1970 here in Cambridge". Hawking and his student Gary Gibbons would go on to collaborate in their research, lending their names to the "Gibbons-Hawking effect", "Gibbons-Hawking space", and the "Gibbons-Hawking ansatz". 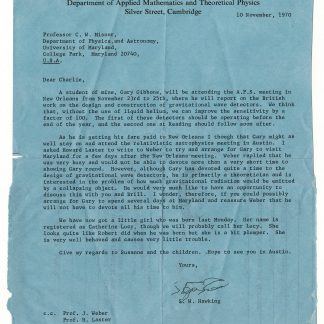