The revenue, judicial systems, and terminology of British India

Massive report detailing the revenue and judicial systems in British India from the 18th century onwards. It is accompanied by Charles Wilkins's important (and mostly missing) Glossary, an early attempt to systematize the etymologically complex terminology of Anglo-Indian rule.

The Fifth Report also led to the Charter Act of 1813, which compelled the East India Company to let missionaries preach to the masses in India. Previously, the Company had discouraged missionary work in the country, fearing that they might incite religious sentiments which would affect the Company's business policy and diplomatic role.

The Glossary aimed to demystify the myriad of Anglo-Indian terms used in the Report. In the Preface, the editor states: "The numerous oriental terms used in the Fifth Report and its Appendix have been adopted from most of the languages current throughout India:

from Arabic, Persian, Sanskrit, Hindustany, Bengaly, Telinga, Tamul, Canara and Malabar; and a few from Turkish and Malay [...]". It was issued separately from the Fifth Report and was very quickly sold out. This is the second edition dated 1830. Yule and Burnell note this in their "Hobson Jobson" of 1886 as the edition used.

Removed from London's Inner Temple Library with their stamps and bookplate. 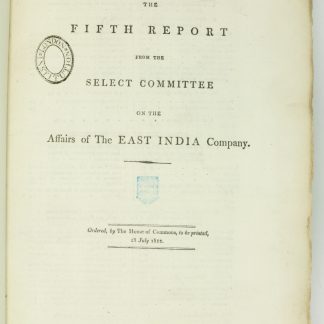