Yiddish study of the Prophet Muhammad

First edition of this Yiddish-language study of the Prophet Muhammad. Includes not only a biography of the Prophet and a discussion of the Qur'an and of Islam, but also chapters with a specifically Jewish perspective, such as on the Jewish population of Arabia (especially in Mecca and Medina), on Muhammad's "dreadful revenge on the Jews", etc. The author published similar accounts on Jesus of Nazareth ("Yeyshu Hanoytsri: zayn ersheynen, leben und toydt: algemeyner iberblik vegen der entshtehung fun kristenthum") and Sabbatai Zevi ("Der Terkisher Meshieh: a historish romantishe shilderung iber dem leben und virken fun Shabtay Tsvi"). The highly versatile journalist, novelist, and playwright D. M. Hermalin (1865-1921) was born and educated in Bucharest, where he worked for various newspapers before being compelled to leave Romania and emigrating to the United States at the age of twenty. Here, he taught French and Hebrew and achieved distinction as a much-admired family page editor for Yiddish newspapers such as the "Folks Advokat", the "Yiddisher Herold", and the "Wahrheit". He wrote thrillers, but also translated Tolstoy, Maupassant, Zola, Bocaccio, and Shakespeare into Yiddish; his 1901 translation of Goethe's "Faust" was the first complete Yiddish version.

Binding severely rubbed; extremeties bumped. Paper browned and brittle with noticeable fingerstaining. The lower wrapper cover, preserved inside the boards, has an English title: "Mohammed. A Study Of the Advent, Life and Activity of the Mussulman Law-Giver and the Results of his Religion", with the publisher's advert of books on sale ("oysferkoyf katalog fun mayn aygenem ferlag") on the reverse. Extremely rare: no copy in trade records; online library catalogues list copies at YIVO, Yale, Harvard, University of California, and Florida Atlantic University, as well as the British Library; several research libraries in the US hold microform copies. 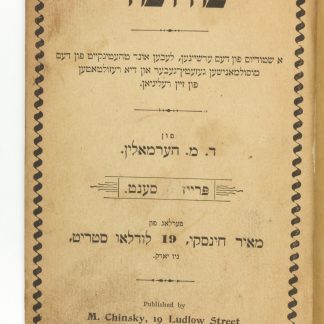