To the writer Charles McEvoy: "What a chap you are! You should have been an operatic tenor, always wanting people to attend to you. Here I am, after slaving myself to death to get my big book through, suddenly forced to stop to produce that wretched play at the Strand Theatre, and then, when I was starting to work overtime to make up for it, knocked out for a month by this infernal pyrexia they call influenza. And all the time you are moaning because, after touching me for - how much was it to get you out of all your difficulties? you immediately demanded £80 more to save you from ruin. And when I throw your letters with oaths into the fire (half a dozen others having been busy cleaning out my loose cash just then) you conclude that my sensitive soul is wounded by your proposal to put it into a play, and modulate your moans accordingly. The reason your play is no use is that people dont [!] go to the theatre to hear that sort of thing. If they want Shaw (which is not invariably the case) they go to headquarters for it, and not to Bath. But that secondhand literary stuff is no use anyhow, no matter how you disguise it. Write a play about a superior young lady, who will not allow anyone to play jazz in her presence, or anything commoner than Bach, and who is revolted by the vulgarity of the cinema: in short, a first rate snob who thinks she is a ten foot highbrow. She meets and loves and is loved by a mistery man who is enormously rich, and loads with her presents, and sympathizes with her fastidiousness. Where, you will say, is the drama here? Very obviously the enormously rich connoisseur is Charlie Chaplin, unrecognizable without the moustache and bowler hat and baggy trousers, though he has a strange sense of having been haunted by his eyes. You can make another The Likes of Er out of that: at least I could. I canT [!] write any more: it puts up my temperature. G. B. S." - With printed address. 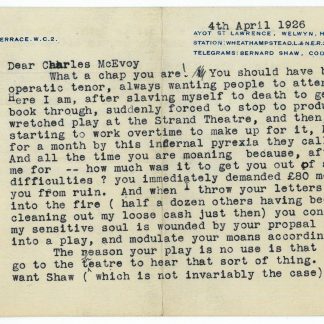