The only known copies in original colour

An exceptional ensemble; the only copies in original colour that we have ever seen: the eastern sheet of Giacomo Gastaldi's famous map of Persia and the fabled "Silk Road" lands to its immediate east (here depicting the Persian heartland, including Isfahan), and the eastern sheet his map of the Middle East, including the first broadly accurate large-format cartography of the Arabian Peninsula, here depicting the territories of modern Bahrain, the United Arab Emirates and Oman, plus parts of Iran, Pakistan and India.

These are one sheet only (of two sheets) each, in resplendent contemporary colour. Gastaldi issued the first edition of the present maps in 1561, and the present sheets are from a rare later edition of this work, published around 1570 by Girolamo Ogiliato (Olgiati, Oligiati), employing Gastaldi's original plates. They are faithful to the first edition in all material respects.

The present example of the map sheets is extraordinary in that they feature splendid period colour, rarely seen in "Lafreri" maps. The first sheet depicts the majority of Persia, including Isfahan and Shiraz, extending eastwards to include large parts of what are today Turkmenistan, Uzbekistan, Afghanistan, and Pakistan. The Silk Road cities of "Samarchand" (Samarkand), "Buccara" (Bukhara), and "Candahar" (Kandahar) are labelled. The second map depicts the eastern part of the Arabian Peninsula and stretches around the arc of the Arabian Sea, encompassing south-eastern Persia, the coasts of Pakistan, much of the west coast of India, as well as the Maldives. Bahrain is labelled "Bahare / Qui so pescaro le perle" ("Bahrain / Where they fish for pearls"). Further east, the entirety of what is today the United Arab Emirates is labelled as "Regno: di Bechari". All of Oman is depicted, including "Moschetto" (Muscat). Beyond the Arabian Peninsula the map showcases a large portion of Persia, labelling "Ormus" (Hormuz / Bandar Abbas). The mapping of the Indian subcontinent extends as far south as northern Kerala, labelling major ports such as "Surat", "Goha" (Goa), and "Calecut" (Calicut).

The maps have recently undergone professional restoration whereby they were removed from their contemporary backing and remounted upon a larger sheet of acid-free paper with added decorative French lines in gilt and blue. The maps' stellar period colour and gilt highlights have been fully preserved.

Condition: very good in excellent original colour; some subtle closed tears, a minor abrasion in the second map and and toning in far right-hand side of the first. Maps trimmed to neatline as common with "Lafreri" maps. 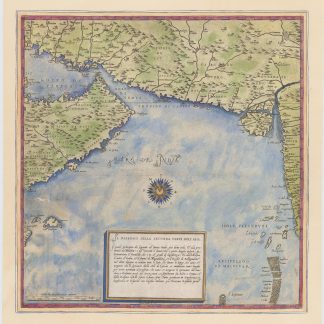