Early letters in Polish of the Russian Jewish lawyer and statesman, who was working as an assistant to a lawyer in St. Petersburg at the time because of the de facto prohibition of Jewish people from the profession in the Russian Empire. Vinawer started to gain his reputation as a jurist writing articles for legal journals and developing defense strategies for criminal cases that resulted from the discriminatory laws against Jewish people. In 1904 he was sworn in as a lawyer. After the 1905 Russian Revolution Maxim Vinawer became a deputy in the first State Duma and co-founded some important groups such as the Society for the Education of Russian Jews and the Union for All Rights of the Jewish People in Russia. Maxim Vinawer took part in the February Revolution but fled to the Crimea before the October Revolution. He joined the Regional Crimean Government, which turned against the Bolsheviks. In 1919 Vinaver emigrated to France where he was active in several exile organizations, co-founded a Russian newspaper and gave lectures on Russian civil law at the Sorbonne.

Both letters to the same unidentified reciptient in Polish. The 4to letter on stationery with letterhead of Maxim Vinawer in Cyrillic. Folded. 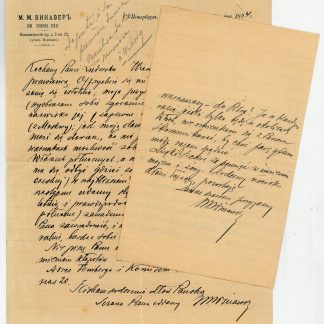