Pembroke, [Henry Herbert], Earl of. Military Equitation: or, A Method of Breaking Horses and Teaching Soldiers to Ride.

Third edition of the Earl of Pembroke's great work on military equitation. Henry Herbert, 10th Earl of Pembroke (1734-94), a colonel in the 1st Regiment of Dragoons, came to be an authority on breaking cavalry horses. In 1755 he built an indoor riding school at Wilton House and commissioned 55 paintings of military riding exercises (now in the Large Smoking Room, Wilton). Despatched to Germany in 1760 to take part in the Seven Years' War as major-general in command of the Cavalry Brigade in Germany, he wrote the British Army's manual on riding, "Military Equitation: or A Method of Breaking Horses, and Teaching Soldiers to Ride" (1761), designed for the use of the army.

Slightly spotted, binding rubbed, rebacked. From the collection of Thomas Fremantle, 3rd Baron Cottesloe (1862-1956), commander of the Territorial Army and president of the Society for Army History Research. 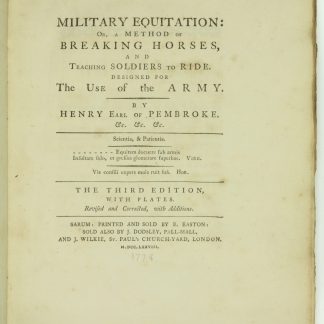