Hinde, Robert. The Discipline of the Light-Horse.

First edition of this scarce classic of British cavalry, published less than two decades after the formation of the first Light Dragoons (the 15th). Captain Robert Hinde retired in 1763 after a distinguished career in the British Army. His obsession with the tactics of war led to this authoritative work on the the use of light cavalry, which proved highly influential in the British Army.

Spine worn. From the collection of Thomas Fremantle, 3rd Baron Cottesloe (1862-1956), commander of the Territorial Army and president of the Society for Army History Research. 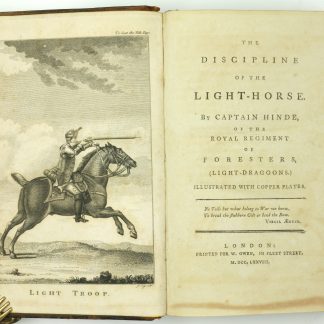