From the collection of the future King William IV

[Eben, Christian Adolph Friedrich Frh. von, military officer (1773-1825)]. Observations on the Utility of good Riflemen both in Infantry & Cavalry, with Instructions for Acquiring the Art of Taking a Good Aim, and Description of Targets [...] To which is added A Short Manual Exercise for Mounted Chasseurs as well as for Dragoons or Hussars, who are Armed with Rifle Pieces [...]. Translated from the Original German Manuscript Under the Inspection of the Author.

Large 4to (211 x 260 mm). English manuscript on paper (watermarked 1797). (2), 86 pp., 1 blank leaf. Text within woodcut margins. With an additional 20 hand-coloured engraved plates (some signed "Merkl", one bound as a frontispiece), many with manuscript captions, and one hand-drawn and uncoloured diagram (numbered "Plate XIV). Contemporary half green morocco over marbled boards.

A manuscript from the royal library of the Duke of Clarence; a fair copy in a single hand. "Very interesting qua rifle details, targets etc. (including moving target of a man or deer)" (inserted old collector's note). Neither the author's German manuscript nor the present translation saw publication, but another copy of this manuscript, with the plates, is kept in the Royal Armories Collection (EBEN 1).

Christian Adolph Friedrich Frh. von Eben (1773-1825) was a Silesian nobleman who trained in the Prussian military. He entered the English service in 1800 (where he was styled Frederic, Baron Eben) and composed this manual in 1802, upon receiving a commission in the 10th (Prince of Wales's) Regiment of Light Dragoons. He went on to fight in the Peninsular War in the Portuguese service and became involved in a conspiracy against the government in 1817. Exiled from Portugal, he served in South America under Bolivar in the 1820s. 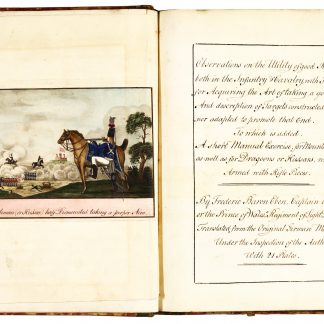