Gerbier, Balthazar. The Interpreter of the Academie for Forrain Languages, and All Noble Sciences, and Exercises, Concerning Military Architecture, or Fortifications.

Second part of this rare treatise on fortifications by the Anglo-Dutch courtier, diplomat, spy, art agent, miniaturist, and architectural designer Gerbier (1592-1663), itself subdivided into two parts, printed in English and French parallel text. It discusses the proper shape, angles and proportions of fortresses in part one, providing tables for their calculation and displaying model fortifications including pentagons, hexagons, and dodecagons. Part two covers the actual construction of forts, describing walls and gates as well as irregular forts, using Breda, Antwerp, Mannheim, Geneva and others as examples.

In 1646 Gerbier inherited a house in Bethnal Green, where from 1649 to 1650 he operated an academy for young gentlemen, the curriculum including horsemanship, foreign languages, cosmography and the construction of military fortifications. The present work probably served as a manual for his students. After the Restoration and, having received royal disdain, Gerbier turned to architecture and entered the service of William, 1st Earl of Craven.

Pagination jumps from 40 to 49; French title-page of part two not included in pagination. Binding chafed in places; small tear to head of spine. Frontispiece and engraved title somewhat browned and brownstained; occasional creases throughout; tear to final plate rebacked with a strip of paper. From the collection of Thomas Fremantle, 3rd Baron Cottesloe (1862-1956), commander of the Territorial Army and president of the Society for Army History Research. 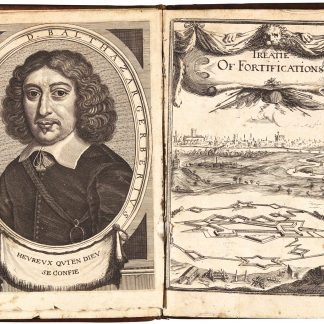 Sie sehen: Gerbier, Balthazar. The Interpreter of the Academie for Forrain Languages, and All Noble Sciences, …No place, 1648. € 1.800,00
In den Warenkorb