First edition under this title.

Very scarce manual for artillery warfare by the military engineer and general Fernández de Medrano (1646-1705): a reissue of his 1681 work "El perfecto bombardero y práctico artillero", also drawing on his 1680 work "El prático artillero". It saw a second and third edition by Amberes in 1708 and 1723, both equally rare. The charming plates, drawn by some of de Medrano's students, were engraved by the Dutch artist Jacobus Harrewijn (1660-1727), who is known to have worked in Brussels from 1695 to 1714. They depict ordnance and munitions, as well as towns under heavy artillery fire.

Binding slightly warped. Minor marginal tears to plates professionally repaired. Pastedowns long separated from interior of boards, with an old pencil sketch of a church to the verso of the lower pastedown leaf.

Provenance: late 18th century handwritten ownership of the artillery officer António Henrique Banazol de Ataíde e Campos to half-title. Later in the famous Ashburnham library assembled by Bertram Ashburnham, 4th Earl of Ashburnham (1797-1878), with his purple ink shelfmark ("26.E") and note "Catal. M 1859" to front inner board. The collection was dispersed by the 5th Earl. Latterly acquired by Thomas Fremantle, 3rd Baron Cottesloe (1862-1956), commander of the Territorial Army and president of the Society for Army History Research (purchased from Pickering & Chatto, 25 August 1899), with his armorial bookplate glued to the recto of the front pastedown leaf. 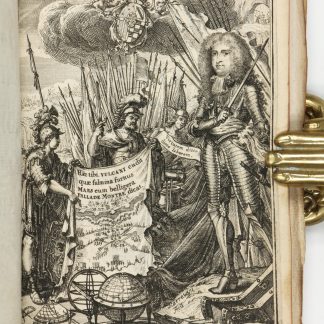